Background: The Brady Bunch is a sitcom that first aired on ABC on September 26, 1969 and ended five short years later in 1974. It went on to syndication and has gained a cult following generation after generation. The show also spawned numerous holiday/reunion specials and two major motion pictures.

The Family Tree: There is only one way to describe this family tree and please forgive me for doing this. Here’s the story of a lovely lady (Carol Martin) who was bringing up three very lovely girls (Marcia, Jan, and Cindy). All of them had hair of gold, like their mother, the youngest one in curls. Here’s the story of a man named Brady (first name Mike), who was busy with three boys of his own (Greg, Peter, and Bobby). They were four men, living all together, yet they were all alone. You know the rest of the story. Two parents, six children, and one maid all under a single roof. Antics ensue.

Fun Facts: The show had cameos by Brooklyn/Los Angeles Dodgers’ Pitcher Don Drysdale and New York Jets’ Quarterback Joe Namath, as well as by Davy Jones, lead singer of The Monkees and namesake of Marcia Brady’s Davy Jones Fan Club. In The Brady Bunch movies, Shelley Long (Cheers) portrayed a spot-on Carol Brady, replacing Florence Henderson. Since the show, there have been rumors and later confirmation that Barry Williams (Greg Brady) had a fling with Florence Henderson who, cough cough, was his stepmother on the show.

1. Oh, Alice! – Alice Nelson was the live-in maid for the Brady family. She was always good for a good life lesson or corny comic relief. Alice would often reference her boyfriend, Sam the Butcher. They later married in a made for TV movie a decade later, but for purposes of this article, let’s assume she had not yet made Sam an honest man by tying the knot. If Alice or Sam did not have a Last Will & Testament, Sam would not receive anything from Alice’s estate and vice versa. In New York, this is the same if you have been partners with someone for decades, but are not married. The statutory scheme for who gets what when there is no Last Will & Testament is based on whether you have a spouse and then whether you have blood relatives. Being only a “main squeeze” means nothing. Do the right thing, Sam. Get down on one knee and make Alice your lawfully wedded wife. Better yet, get a will and make sure she is taken care of between now and the wedding ceremony.

2. Being Brady – When Carol decided to marry Michael, she also decided to take his name. All of the Martin girls did. It is presumed that they were adopted by Michael and that Carol became the adopted mother to the boys. The question of whether the were adopted or not makes a huge difference in determining who Michael and Carol’s heirs are. Mike Brady was a widower. Carol was presumably a widow. There is no real explanation for what happened to her first husband. If divorced, it would be far harder for Mike Brady to adopt the girls, as his adoption would remove their natural father as someone they can inherit from.

If Mike and Carol are the parents (natural or adopted) of the children, it means that for purposes of inheritance from Mr. and Mrs. Brady, Cindy is no different than Bobby, Marcia no different from Peter. If they were not adopted, however, Mike’s kids are his kids only and Carol’s hers. It would have huge ramifications if the Bradys did not do any estate planning. In this scenario, Mike dying on a job site for his architecture business would mean that his assets go to his wife and his boys with nothing going to the girls. In addition, with no adoptive mother, the boys would be minors with no guardian named for them, a huge no-no. 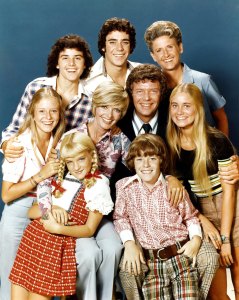 3. George Glass – Jan Brady had issues. There is no other way to put it. As if being the middle child wasn’t tough enough, Jan was second to the beautiful Marcia Brady and then was seemingly lost in the shuffle when her mother married Mr. Brady. Jan did all sorts of things to get attention, the most notorious of which was to claim she had an (imaginary) boyfriend named George Glass. Many of our estate planning documents will carve out a right for the executor (of your estate) or the trustee (of your trust) to hold back or otherwise dispose of an inheritance to a third party if they believe that the actual beneficiary is under a legal disability or is unable to use such inheritance in their best interests and advantage. It is a safety valve to make sure that your beneficiary who is dating imaginary people doesn’t receive assets just yet.

The TV lessons in Estate Planning blog provides general information for educational (and entertainment) purposes only.  Due to the particulars of each person’s circumstances, this blog should not be considered legal advice applicable to your specific fact pattern.

One thought on “TV Lessons in Estate Planning: The Brady Bunch”